As the epidemic situation continues worsening, many have flocked to the vaccination site at the Taipei Main Station on the last day of receiving walk-ins. Taipei City Deputy Mayor Vivian Huang said the city is braced for the possibility of upgrading the alert level to 2.5.

Jan. 27 was the last day that the walk-in vaccination site set up at Taipei Main Station was open. Long lines formed inside the main hall, and many people brought chairs in anticipation of a long wait.

Ms. Wang, Resident: “When I joined the line yesterday, it was already outside. I probably waited about two hours. I finally got inside, and then someone rushed out and said there were no more vaccines. I went home without getting a vaccine. I'm here lining up again today. I can only get my second (BNT) dose like this.”

Mrs. Wang, Resident: “I made an appointment (for a booster) for myself. She's under 18, so I had to accompany her.”

People started lining up at 6 a.m. However, numbers weren't handed out until 12:45 p.m., and BNT vaccines weren't administered until after 1 p.m. The city government rushed over an additional 200 vaccines, and also notified people when to come and get their vaccines to avert the chaos of previous days.

Tsai Ping-kun, Deputy Mayor, Taipei City: “We originally offered 2,400, and we increased that to 2,600. After people get a number, we'll give them a slip telling them what time they can show up to get vaccinated. This way, they won't have to wait around here.”

Li Chang, Secretary-General, Chihlee University of Technology: “He came to the school on Jan. 21 for a final exam. He left after taking the exam. He didn't return to the campus after that.”

Takming University of Science and Technology said winter vacation started on Jan. 7, and the infected student wasn't on campus so there is no need for contact tracing. Many recent cases can be linked to on-site dining. Will dining policies be adjusted? Taipei City Deputy Mayor Vivian Huang said the city is already prepared to upgrade to Level 2.5.

Vivian Huang, Deputy Mayor, Taipei City: “There are Taipei restaurants where infected cases went. Level 2, Level 3, we have our own SOPs, and we are already prepared to go up to Level 2.5.”

Huang said new measures may be implemented over the Lunar New Year holiday if needed. Residents are urged to be vigilant and not panic. 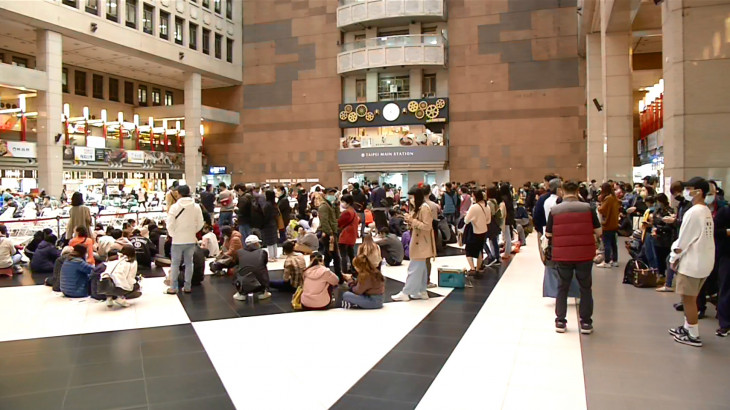