Three workers at CPC Corporation's Dalin Refinery in Kaohsiung recently tested positive. The company has been asking retired employees about their willingness to come back to work to ensure the outbreak won't affect the oil production .

A security guard takes temperatures at the entrance of CPC Corporation's Dalin Refinery in Kaohsiung. Three employees recently tested positive for COVID-19. They all work at the 12th distillery. The Kaohsiung City Government ordered the company to test all 2,300 of the refinery's employees. You have to get tested before you can return to work. Those people who work early shifts took them before reporting for work. According to reports, 1,901 people were tested as of Feb. 16, and all results were negative. The company is afraid that an outbreak will affect production, so it is inquiring with retired employees from each of the refinery's departments about their willingness to come and provide support.

Chang Ray-chung, Spokesperson, CPC Corporation: “We asked newly retired senior colleagues about their willingness to return to the company to provide support during this transition, because they understand how the refinery operates. Asking them about their willingness can be considered a preparatory measure. You can say we're making preparations.”

CPC Corporation said it will continue contacting retired employees, and added that this is only a backup measure. The refinery is currently operating normally and the output has not been affected. There is a testing site, but it's inside the complex. Nearby residents say another testing site should be set up in their community.

Resident: “It's necessary. (What do you mean?) This is a better way to prevent disease.”

Resident:  “If the transmission chain expands, then they should consider setting up a testing site here.”

Previously, testing sites were set up in implicated districts after transmission chains involving Kaohsiung came to light. Health officials said they will monitor this outbreak and a community testing site will be set up if needed. 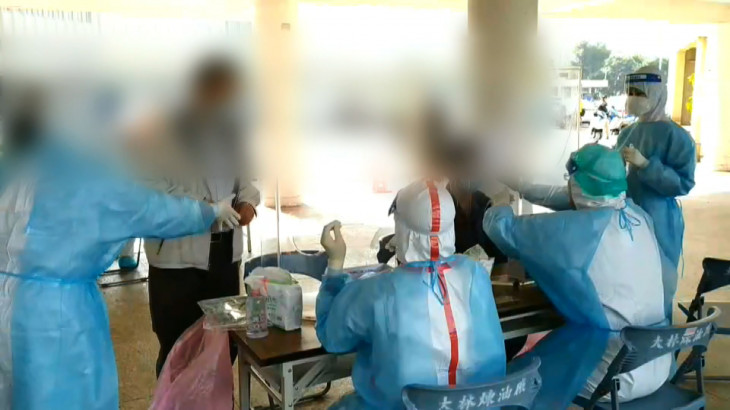