Long queues were seen outside pharmacies across the island on April 28,  the first day when the real name-based rapid test kit purchase rationing system was launched. The NHI system also crashed in the morning due to the high number of transactions.

It's not even 9 a.m. yet, but a long line has already formed outside this Taipei pharmacy. The people in line are waiting to buy rapid tests.

Mr. Li, Taipei Resident: “I couldn't find any during the past several days, so I made sure to come here today.”

Taipei Resident: “I'll first test my children after I buy them, to make certain that they're safe, and then we'll test an elderly person in my household. He's doing rehab, so we want to make sure he's okay too.”

Over in Taitung, where the epidemic situation is somewhat easing, the demand for rapid tests wasn't as high as it was before for masks.

Taitung Pharmacist: “We expected that there would be lines, but things look under control right now. Everyone is following the rules.”

COVID-19 is spreading rapidly across Taiwan, and demand for rapid tests has soared. The Central Epidemic Command Center previously announced the launch of a real name-based rapid test rationing system on April 28. Under the system, people can present their National Health Insurance cards at one of 4,909 NHI-contracted pharmacies and 58 rural health centers to purchase a pack of five rapid tests priced at NT$500. The last digit of a person's national ID card number determines when tests can be purchased. Those with odd numbers as the last digit can purchase kits on Mondays, Wednesdays, and Fridays. Those with even numbers as the last digit can purchase kits on Tuesdays, Thursdays, and Saturdays. Anyone can purchase it on Sundays.

Huang Yen-ju, Spokesperson, Fed. of Taiwan Pharmacists Associations: “First of all, please don't panic. During this round, each NHI card will only be able to purchase one pack. If you purchased it today, then you won't be able to make any more purchases during the current round.”

The NHI system crashed at 8:30 a.m., preventing cards from being read. Pharmacists had to either hand out kits and input information later, or give people numbers to pick up kits in the afternoon. The NHI Administration said the system crashed because too many people were using it. It has already been restored and it is currently operating normally. Its website has information about where pharmacies selling rapid tests are located and their current stock. 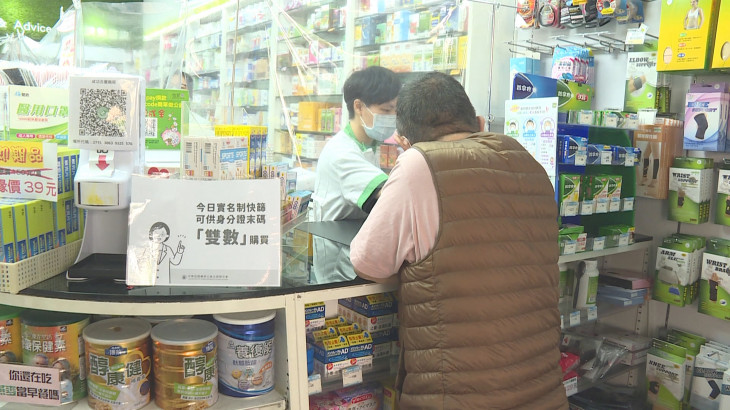