Premier Gets into Argument with Lawmaker During Interpellation 鄭麗文昨質詢與蘇揆對嗆 藍要求蘇道歉

During a legislative interpellation, Kuomintang Legislator Cheng Li-wen got into an argument with Premier Su Tseng-chang. The KMT caucus later called on Su to apologize for his actions. In response, Su said he has to put people in their place when they lie about the president during an interpellation.

Su Tseng-chang, ROC Premier vs. Cheng Li-wun, Legislator (KMT)："If we're really going to enter into an arms race, tell me: How are we going to win? (You're going to surrender, aren't you?) I'm talking about if we should develop nuclear submarines. Can you listen? (So you want to.) Why are you afraid to develop nuclear submarines? (You just want to surrender.) If we have nuclear submarines, they would be so much better than traditional submarines. (You don't want anything. You feel the best course of action would be to surrender, right?) I think the first person to surrender will be you. The second will be Tsai Ing-wen. (I wouldn't be as shameless as you.) (Deputy) Premier, can you handle this? (You asked me to stump for you in the last elections. How embarrassing.)"

During an interpellation on the 12th, Kuomintang lawmaker Cheng Li-wun and Premier Su Tseng-chang got into an argument over nuclear submarines. The next day, the KMT caucus called on Su to apologize.

Cheng Li-wun, Legislator (KMT)："This was a major gaffe, and the public deserves an apology. I'll forgive you, but do you have the courage to apologize?"

Su Tseng-chang, ROC Premier："Someone thought they could spread fake news during an interpellation. For no reason, they said the president would be the first to surrender. This has had a severe impact on national morale. As the premier, I had to furiously oppose this traitor. I had to dispute the lie and stand up to the chaos. This is what I had to do."

Su's use of the word "traitor" did not go unnoticed, as the Democratic Progressive Party branded Cheng a traitor after she left the party to join the KMT. The KMT caucus then pointed out the DPP has lawmakers that had switched parties as well.

Fai Hrong-tai also said if Su won't apologize for his gaffe, the KMT would sue him at the end of the week. The DPP caucus then held a press conference to say what Cheng said about the president and premier are not covered under freedom of speech because her words damaged the leadership prestige of Tsai, the leader of the three branches of the military that stand up to China. According to the DPP, the KMT is just mad about the "four commitments" Tsai discussed in her National Day address. 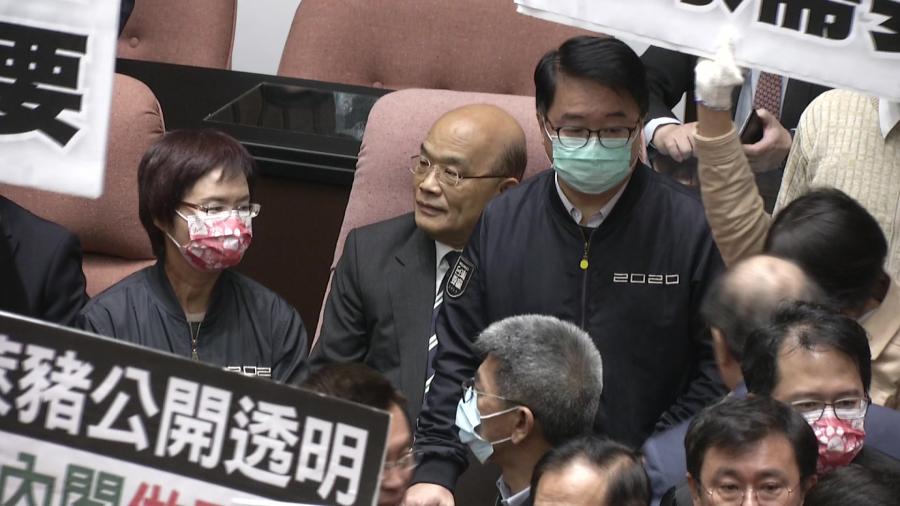