The Chinese media has reported an outbreak at the Wuhan Mental Health Center. Meanwhile, 32 cases were confirmed at a department store in Tianjin's Baodi District. In Hong Kong, nine people were infected after sharing a hotpot during the Lunar New Year period.


The Beijing News has reported that the novel coronavirus pneumonia epidemic is continuing to spread in Tianjin. The number of confirmed cases in Tianjin stood at 91 as of Feb. 9, including 32 in Baodi District. On Feb. 2, Tianjin confirmed five cases, and the local centers for disease control and prevention discovered that all the cases had a department store in common. Five days later, the number of cases rose to 23. As 9,000 people passed through the department store in question, authorities determined that this was a cluster infection. As a result, nearly 10,000 people are in isolation.

Our objective is to block the channels in which the virus can spread. We cannot allow this Baodi department store to become another Wuhan seafood market.

A Chinese weekly has also reported an outbreak inside the Wuhan Mental Health Center. At least 50 patients and 30 medical personnel have been confirmed to have novel coronavirus pneumonia. Over in Hong Kong, disease prevention personnel went to a residence to take samples on Feb. 9. A 24-year-old male and his grandmother were confirmed to have novel coronavirus pneumonia. It was determined that the infection had occurred when the family shared a hotpot during the second day of the Lunar New Year, including two members who had recently returned from China's Guangdong Province. Seven other people also tested positive. The Hong Kong government says tracing the source of the infection is problematic, and admitted it is difficult to prevent the disease from spreading within communities.

Symptoms were light in many of the cases. The current situation is that it's very difficult to isolate all suspected cases or trace the people they came into contact with. It is very difficult to prevent the disease from spreading within communities under the current strategy.
The cruise ship World Dream is currently berthed in Hong Kong and 3,600 people were allowed to disembark on Feb. 9 after there were no positive tests among the 1,800 crew members.

I'm so happy. (Why?) It really was difficult being shut inside for several days.

Some passengers were happy to get off the ship, while others worried about getting infected in Hong Kong due to the presence of Chinese tourists and said they preferred to remain on the ship. 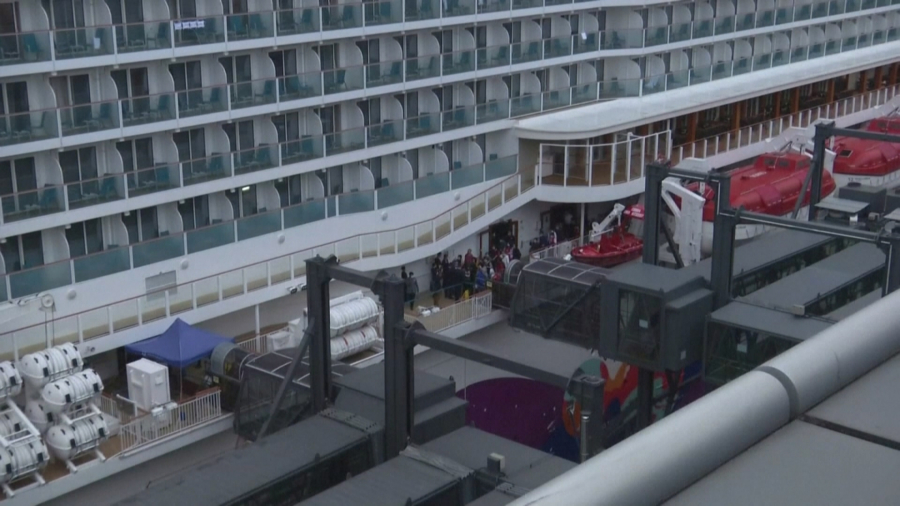