Aside from the military drills, China is also stepping up its online information war on Taiwan.

The headline said that Taiwanese authorities were planning to transfer National Palace Museum's cultural relics overseas and also scolded President Tsai Ing-wen. A Chinese netizen posted on a Chinese website, saying that Taiwan has already made plans for the worst, and 90,000 selected collections from NPM will be transferred to the U.S. and Japan. However, NPM immediately refuted the news.

Huang Yung-tai, Deputy Director, National Palace Museum: “We solemnly refute such news. We have never proposed a so-called plan to move the artifacts, especially overseas. There is no such thing. All 690,000 pieces (cultural relics) are exquisite artifacts that are worthy for us to cherish.”

The situation in the Taiwan Strait has heated up. NPM, which has more than 690,000 precious cultural relics, has also attracted attention for how it evacuates in the event of war. NPM pointed out that it has held relevant drills and evacuation plans, but details cannot be shared with the public. Feng Ming-chu, NPM's former director, believes that it is safest to leave cultural relics in place.

Huang Yung-tai, Deputy Director, National Palace Museum: “In the time of war, any one factor is a risk. The museum is a great location due to its environment and warehouse.”

The red background map reads "there is only one China in the world." Not only is fake news being spread about NPM, but the National Taiwan University websites of its Academic Affairs Office and Research and Development Office have also been hacked and replaced with slogans. The university is still fixing its web pages on the morning of the 8th. The PLA has recently conducted military exercises in the waters surrounding Taiwan to intimidate the country with force. At the same time, it has also launched cyber-attacks. Many public and private sector websites have suffered damage. Therefore, the government, schools, and the public must all face this cognitive aggression cautiously. 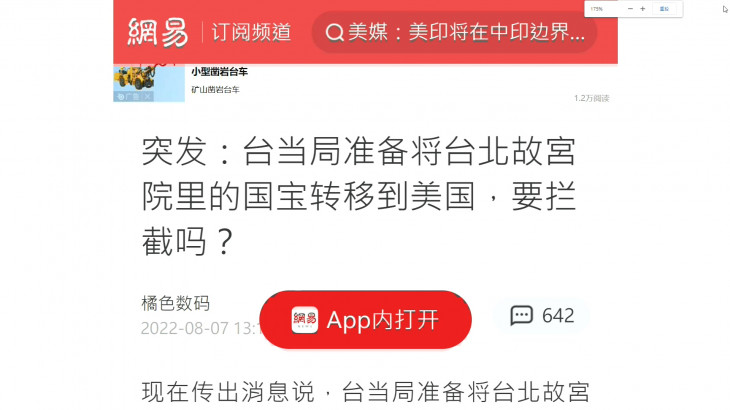