The worsening epidemic situation has resulted in a drop in reservations for trains chartered by the Hualien County Government for the Lunar New Year period. The county government said each service currently still has around 300 available seats.

This system is for people to book tickets on four train services chartered by the Hualien County Government for the Lunar New Year period. Each service currently still has around 300 available seats. The county government says this is the lowest reservation rate it has seen since it started offering this service a dozen or so years ago, and attributed it to the worsening epidemic situation.

Wu Min-hsien, Section Director, Hualien County Civil Affairs Dept.: “We've only sold 50 percent of the tickets so far. There are still about half, or 300, that are still available. Last year, the trains were 80 percent full.”

Mr. Tung, Returnee: “We try to avoid situations where there are lots of people. We only bring kids out when there are few people around.”

Taiwan Railways has sold out of Eastern Line tickets for the holiday, and not many people have canceled their reservations. However, cancellations are increasing for weekday and weekend travel in the period leading up to the holiday. Even Taiwan Railways' famous boxed meals have been affected.

Lin Te-hsiang, Stationmaster, Taiwan Railways Hualien Station: “The number of canceled tickets has increased, but not too significantly. There are around 6,000 people getting on and off trains on weekdays and 15,000 to 16,000 on weekends.”

Chang Su-yun, Train Services Director, Taiwan Railways Hualien Branch: “It was announced yesterday that confirmed cases had been in Hualien, and sales of our boxed lunches immediately fell by 20 percent.”

The Ministry of Transportation and Communications will offer incentives for people to take intercity buses during the holiday. It is working with three bus companies to add three routes to Hualien in the hopes that people will take public transport instead of driving and causing congestion on National Freeway 5 and the Improved Suhua Highway. 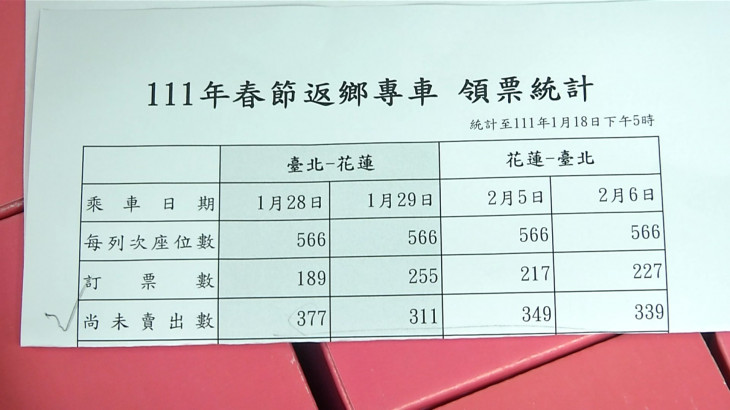