The first game of the new Chinese Professional Baseball League season kicked off on April 12. In the game, the Uni-President 7-Eleven Lions beat the Chinatrust Brothers 4 to 1 in 11 innings.


Although there were no fans inside the stadium, the cheerleading squad still gave it their all during the first game of the new Chinese Professional Baseball League season between the Uni-President 7-Eleven Lions and the Chinatrust Brothers on April 12. The CPBL became the first pro league to play baseball in 2020. In the top of the second, the Lions scored the first home run of the new season.
The ball flies in the direction of the left field, let's see if it's a fair ball or a foul ball.

Lions outfielder Cheng Kai-wen faced off against Brothers starting pitcher Ariel Miranda. They were at a full count when Cheng slammed the ball in the direction of left field, scoring a solo home run and helping the Lions to take the lead. In the bottom of the fourth, the Brothers evened the score.

The ball is hit, going deep in center field. What a hit from Chan Tzu-hsien.

Brothers outfielder Chan Tzu-hsien swung at an outside changeup pitch, and sent the ball hurtling over the center field wall and tying the game at 1 to 1. The two teams both showed some spark, but the relief pitchers managed to keep the game under control. The game was still tied after the ninth, so it went into extra innings.

That's a strike! Three balls and three strikes. Pinch hitter Teng Chih-wei strikes out, ending the inning for the Uni-President 7-Eleven Lions and leaving a runner stranded on base.

In the top of the 11th inning, the Lions scored two base hits at their first two at-bats, and the runners got to first and third. Chen Chie-hsien took advantage of the opportunity.

The ball is hit and goes deep towards the center field.
Chen's hit reached the center field wall, helping the Lions to take the lead. The next batter was pinch hitter Kuo Fu-lin, who hit a double towards the left field that ended in two more points for the Lions. The Lions scored three points in the extra inning, and pitcher Lin Hang kept the Brothers scoreless in the bottom of the last inning, helping the Lions to defeat the Brothers 4 to 1. Although the Lions notched nine base hits in the game, its players struck out 18 times, setting a new record for a season opener.

Taoyuan Baseball Stadium was scheduled to host a game on April 12 between the Rakuten Monkeys and the Fubon Guardians. Although there was no rain in Taoyuan in the afternoon and the sun even came out, the field was still muddy and the game was finally postponed. The Monkeys were therefore unable to play either of their first two games as they also featured in the first one. Monkeys general manager Yoshinori Kawada says he intends to learn more about the drainage situation at the stadium. 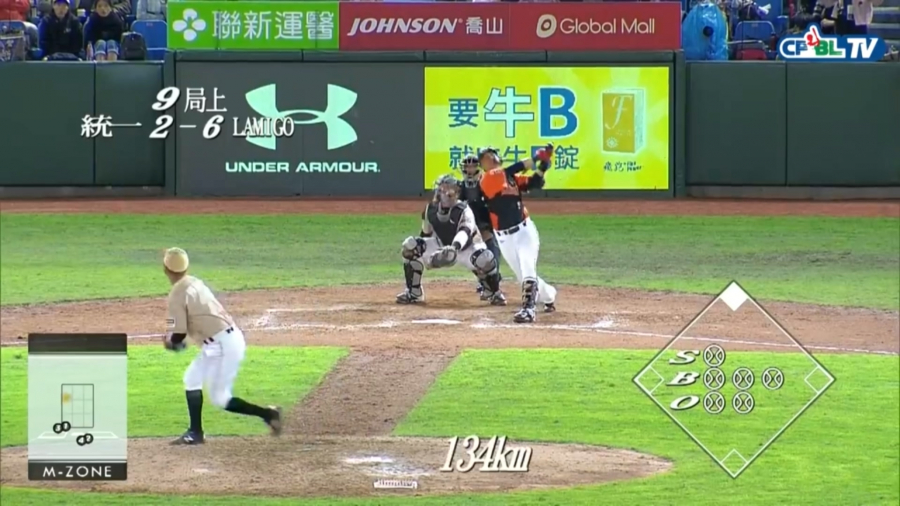