A huge landslide occurred on March 27 at the Provincial Highway 8, which is located in Hualien. The incident is thought to be related to recent earthquakes and frequent rain.

Waiting motorists are reminded that the upcoming road section has suffered a landslide and to quickly traverse the dangerous section. At 3:30 p.m. on March 27, a landslide occurred at the 117.4-kilometer mark of Provincial Highway 8 in Hualien, and huge amounts of earth as well as rocks blocked the roadway. This is thought to be related to recent earthquakes and rainfall. Workers began repairing the road from both ends.

Chang Pei-yun, Dep. Director, Taroko Branch, 4th Maintenance Office, DGH: “The volume of soil and rock that fell this time is over 1,000 cubic meters. The extent of the affected road is about 50 meters long. A section of the roadbed was also damaged. We will first clear away loose soil and rocks on slopes.”

The police closed off the road on the west side and limited access. It also sent officers to monitor the scene. No one witnessed the landslide, so workers had to dig cautiously in case there were any people or vehicles buried under the soil. Luckily, they did not find any victims. The road reopened at 6:50 p.m.

Juan Han-kuei, Deputy Chief, Hehuan Police Station: “As of now, there are no casualties. The police monitored the entire process, and the road was just reopened. There were no people or vehicles buried by the landslide.”

As the soil and rocks on adjacent slopes became loose and the line of sight is poor at night, the Directorate General of Highways closed the road from the 114.6-kilometer mark to the 151.7-kilometer mark at 8:30 p.m. The road reopened at 7 a.m. on March 28, although the rainy weather meant that controls could be reinstated at any time. Motorists are reminded to take extra precautions due to the recent earthquakes and rain. 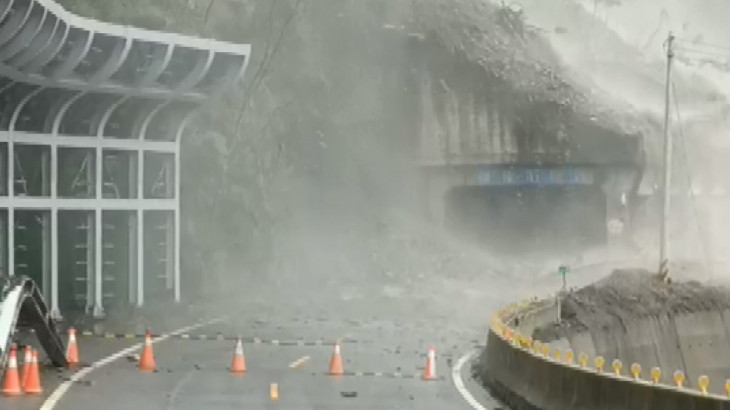