Just one day after a large fire at a Carrefour logistics center in Taoyuan, another fire broke out at an engine oil packaging factory in the same district. Fortunately there were no casualties.

Fire was burning profusely at the factory located in Yangmei District of Taoyuan, sending thick, black smoke into the air. The factory made out of iron sheets is completely out of shape. The fire broke out at past 4 a.m. on the 15th. Two cars parked outside next to the factory were also destroyed in the fire.

Resident Nearby: “I smelled the scorch early in the morning. I suspected the cars were burning. Yeah, I could smell that something's burning.”

The engine oil packaging factory seems to have been operating illegally since it doesn't have exterior signage. Engine oil containers were scattered around on the floor inside the factory, which caused the fire to burn more violently and out of control. About 100 square meters of the area were burned. Fortunately, there were no injuries.

Chen Chun-tse, Yushih Squadron Chief, Taoyuan Fire Department: “The fire got reported at 4:17 a.m. We immediately sent 26 fire trucks carrying 76 fighters to the scene. We were able to control the fire by 6:44 a.m. and extinguished it by 7:16 a.m.”

Two fire incidents happened in Yangmei during the last two days consecutively. A fire had just broken out at Carrefour's logistics center on the 14th and now another fire at an engine oil factory in the area.

Liu Kuo-jung, Deputy Chief, Second Brigade, Taoyuan Fire Department: “There is plenty of leftover ashes and debris on the racks so our firefighters will keep checking to make sure that there are no more collapses.”

Cheng Wen-tsan, Taoyuan City Mayor: “The burning seemed to have started from the pallet section located towards the back of the warehouse. We are in the process of cleaning the warehouse and investigating if the fire was caused by staff or other reasons.”

Taoyuan City Mayor Cheng Wen-tsan demanded a thorough security check-up for logistics and storage facilities in the city. In addition, Cheng said that Carrefour should reconstruct their warehouses with higher standards and consider building more divisions with fire-rated walls to segregate goods and services. Cheng is also calling for Carrefour to strengthen their staff training in case of fire emergencies. 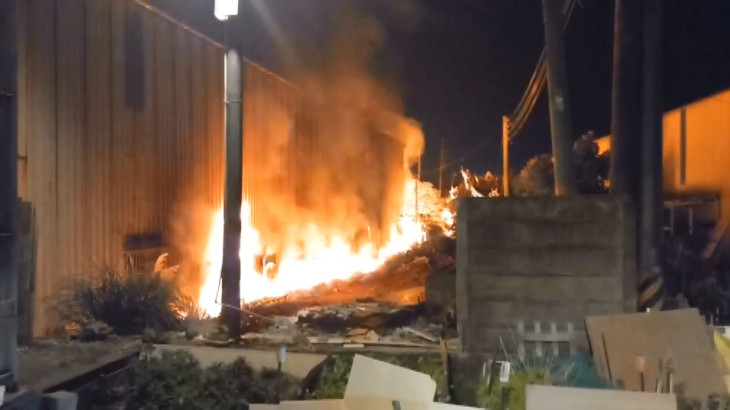