A rockslide occurred on Provincial Highway 8 after days of rain. The sudden "rock shower" caused a moped driver to fall to the ground. Witnesses immediately called for assistance.

A motorist was traveling along Provincial Highway 8 when a rockslide suddenly occurred. The driver fell to the ground, and the vehicle was damaged by the rocks. Witnesses immediately called for assistance. An ambulance arrived and determined that the motorist's vital signs were stable. However, she was confused and had sustained facial injuries, so she was sent to a hospital. This incident occurred on Dec. 21 at the 24.5-kilometer mark of the highway. It had rained the entire day, leading to the rockslide.

Ni Wei-teng, Captain, Heping Branch, Taichung City Fire Bureau: “The motorist dropped onto the roadside. Her right cheek was swollen. It appears that she was trying to dodge the falling rocks and slipped and fell. ”

It rained all over Taiwan on Dec. 21 due to the peripheral circulation of a typhoon. Taichung's Heping mountainous area saw continuous heavy rain. Rockslides also occurred at the 35-kilometer mark of the highway and along a shoulder. The Guguan Branch of the Second Maintenance Office sent machines to clear the road. It said that rockslides are still possible even though the rain has abated.

Lu Cheng-an, Director, Guguan Branch, 2nd Maintenance Office, DGH: “It rained the entire day, and quite heavily at some points. The slopes accumulated a lot of water. This highway section was already prone to rockslides.”

The branch said it will step up patrols over the next several days as well as use drones to examine the condition of the rock strata. Rockslides are still possible as the rock strata accumulated a lot of water, so motorists need to be careful. 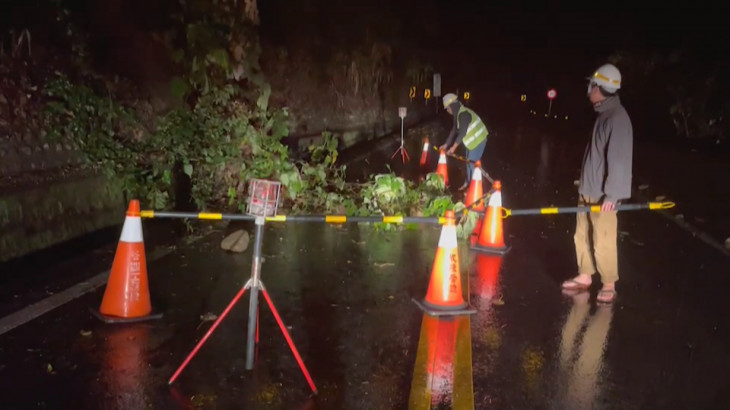